The Dangers of Yoga 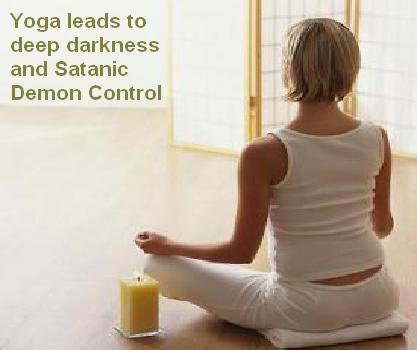 Although I was delving into the Occult before I became a Christian I have not personally been involved in Yoga but I have seen the demonic results of those who have been and also Christian Testimonies damaged by what seemed harmless and beneficial exercises but are in Truth dangerous Pagan rituals to their gods leaving the Soul polluted. We do not have to be involved with evil to recognize evil.

But let’s remember Satan is defeated in a Christian’s Life, God protects our Soul, if we have been involved in dangerous practices  we Pray as King David did (see below)  with assurance God will set us free and purify us, conforming us into the image of Jesus.

Below is a link to  Beth Eckert’s Blog and part of her warning against Yoga and the Occult.  Beth is a courageous woman who was also involved in the Occult before becoming a Christian, she now contends with God warning others of the dangers of Yoga and other Occult practices. Beth’s warning comes from Love offering protection to those who blindly seek harmony through Yoga knowing they will only find disillusionment and Bondage.

Practices such as Yoga, meditation, channeling energy, tai chi, kung fu, karate, acupuncture, mantras, mandalas, reiki and feng shui are all based on these spiritual teachings or principles that incorporate the gods and goddesses or the channeling of energy. All gods and goddesses are false gods aka demons. There is only one God, and He is the One who created the heavens and the earth. Any other “god” is like Satan; looking to become like god in order to gain power and control over humanity.

As I grew in my relationship with Jesus Christ I understood that Yoga was a spiritual practice to invite demons in. What I did not realize was that I was taught to use Yoga to channel demons into my being during satanic rituals as a child.

During one of my sessions that I have weekly, the Holy Spirit revealed to me how Yoga was used in satanic rituals. Each specific Yoga pose has a purpose in opening you up to the alignment of your spirit and soul with different deities. It is channeling the kundalini spirit through your spine, said to be the lifeline of your body……..continued on Beth Eckert’s Blog link below.

We remember when we do stand up against Satan’s evil practices, we will often be abused or contradicted by those he has blinded and are in darkness.

Thank you for taking the time to read about the dangers of Yoga,  Christian Love and Blessings – Anne.

My name is Anne although some call me Grannie Annie especially Children whom I share with in my Funday School . I live in Queensland Australia. I’m very much a People person believing we are all People of worth and unique, so I have much Joy in sharing with people personally and over the Internet. My main focus in life is my wonderful Friendship with Jesus Christ, without Him everything else would be meaningless, I have deep heartfelt thanks and appreciation that I'm a Spiritual Child of The King of Kings and I seek to share with others how truly wonderful that is with the hope they too will realize the same and be set free now.
View all posts by Freedomborn →
This entry was posted in Messages From The Heart, Words of Warning and tagged The danger of the Occult, The evil of Yoga, The Occult, Yoga, Yoga danger. Bookmark the permalink.

44 Responses to The Dangers of Yoga