Reach Out In Love 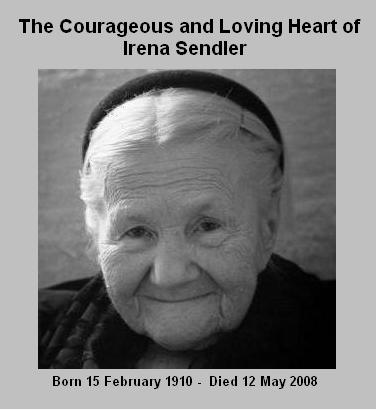 Irena Sendler a Loving, Courageous Christian woman was one of the most dedicated and active workers in aiding Jews during the Nazi occupation of Poland. She was raised by her Christian Parents to Love and care for people regardless of their beliefs or social status and her life showed she did but Irena also stood up against what she knew was wrong

Her father a Physician, died from Typhus that he contracted during an epidemic in 1917. He was the only Doctor in his town near Warsaw who would treat the poor, mostly Jewish victims of this tragic disease. As he was dying, he told 7-year-old Irena…

“If you see someone drowning you must try to rescue them, even if you cannot swim.”

In 1939 the Nazis swept through Poland and imprisoned the Jews in ghettos where they were first starved to death and then systematically murdered in killing camps. Irena, by than a social worker in Warsaw saw the Jewish people drowning and resolved to do what she could to rescue as many as possible, especially the Children.

As an employee of the Social Welfare Department, she had a special permit to enter the Warsaw Ghetto to check for signs of typhus, something the Nazis feared would spread beyond the Ghetto. During these visits, she wore a Star of David as a sign of solidarity with the Jewish people and so as not to call attention to herself… Her heart goal was to save as many Children as she could and with the help of the Catholic Church and other caring Christians who supported her. Her courage enabled not only the survival of 2,500 Jewish Children but also of the generations of their descendants.

Irena “code name Jolanta” smuggled out infants in the bottom of a tool box she carried in the back of her truck. She used a burlap sack for bigger Children. She also had a dog in the back that she trained to bark when Nazi soldiers let her in and out of the ghetto. The soldiers wanted nothing to do with her dog and thankfully the barking covered noises of the infants some of who were also sedated to keep them from crying. Older children who could pretend to be ill were taken out in Ambulances, with help many were smuggled through sewers or underground tunnels, or taken through an old Courthouse or Church next to the Ghetto.

Irena listed the name and new identity of every rescued Child, she hid the list in glass jars and buried them under an Apple tree in her friend’s backyard. Her hope was to reunite the Children with their families after the war. Indeed, though most of their parents perished in the Warsaw Ghetto or in Treblinka, those Children who had surviving relatives were returned to them after the War the rest were adopted by caring families.

For two years, Irena’s covert operations were successful. Then, in October 20 1943 the Gestapo caught up with her. She was arrested, imprisoned in Warsaw’s notorious Pawiak prison, and tortured her feet and legs were broken, yet even in her pain Irena refused to betray any of her co-conspirators or to reveal the whereabouts of any of the Children. She needed crutches and a wheelchair as a result of those injuries until she died in May 2008 at the age of 98 also still having the scars of those beatings Irena was sentenced to death but with help she escaped from prison, but for the rest of the War she was pursued by the Gestapo.

Irena Sendler was awarded the Order of White Eagle, Poland’s highest distinction in Warsaw in 2003 at a special session in Poland’s upper house of Parliament, the President announced the unanimous resolution to honor Mrs. Sendler for rescuing the most defenseless victims of the Nazi ideology…”The Jewish Children.” He referred to her as a “great heroine who can be justly named for the Nobel Peace Prize. She deserves great respect from our whole Nation.”

When we are in Christ Jesus He rises in our Heart and we are His Hands, His Feet, His Voice, His Arms and in Love and Compassion we reach out to those who are drowning in the Storms of Life and even if we find it hard to Stand in the Storms, Jesus will Stand for us and because we Trust in Him we do not fear.

It’s not in His will that we suffer in His Name as the Scripture below confirms but He knows we will and No we don’t rejoice for how we suffer or seek to suffer needlessly but we rejoice that He is with us in whatever we suffer and we can be assured it will be used for good in our lives and in the lives of others.

Jeremiah 29 :11-12 For I know the thoughts that I think toward you, says the LORD, thoughts of Peace and not of evil, to give you a Future and a Hope.

Lamentations 3: 33 For God doth not afflict willingly nor grieve the Children of Men.

Christian Love in our Unity in Christ Jesus – Anne.

My name is Anne although some call me Grannie Annie especially Children whom I share with in my Funday School . I live in Queensland Australia. I’m very much a People person believing we are all People of worth and unique, so I have much Joy in sharing with people personally and over the Internet. My main focus in life is my wonderful Friendship with Jesus Christ, without Him everything else would be meaningless, I have deep heartfelt thanks and appreciation that I'm a Spiritual Child of The King of Kings and I seek to share with others how truly wonderful that is with the hope they too will realize the same and be set free now.
View all posts by Freedomborn →
This entry was posted in In Memory, Messages From The Heart and tagged Amazing Love, Caring, Children, Children Rescued, faithful, God's Faithfulness, God's Mercy, God's Truth, Love, Love is an Action not just a word, Rescued, War. Bookmark the permalink.

20 Responses to Reach Out In Love