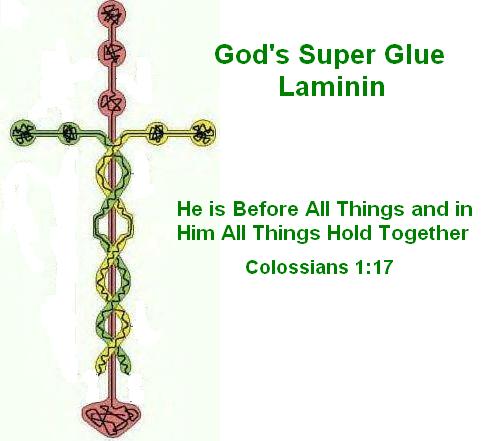 Does God have Super Glue…Yes and it is greater than any substance that man can invert and it holds fast when all else fails.

So What is it? Its called Laminin and all God’s Created Human beings and Animals have it unless they have muscular dystrophy or other illnesses where Laminin isn’t produced correctly

Laminin is a cell adhesion protein.”it is vital to making sure that your overall body structures hold together. ‘” Clearly, Laminins “are an integral part of the structural scaffolding in almost every tissue.”

You may have heard of Laminin before but perhaps you are unaware what it looks like, below you can see very clearly that it is in the shape of the Cross but we can also see that it resembles other forms and shapes too and they too symbolise Christian Truth as you can see by the Scripture listed.

In the K.J.V they use the word Consist which in the Greek means constitute or form or compose the substance of… as you can see it is saying the same thing everything is in Christ Jesus He is the Creator and was from the beginning.

I found some Websites on the Internet who were opposed to the concept of Laminin resembling a Cross and also being significant  but noticed they only showed the first image above not the second one, I wonder why.

Some were Cults who also rejected the Godhead or Trinity as They are called today, another claimed we should not be looking for signs, which surprised me that  Laminin which is part of us all  and not hidden, would be called a sign, although it does show God’s signature but it’s clear to all.

Another said we don’t need confirmation but Jesus said Miracles show God’s reality and  the Scriptures confirm we can see God in Creation, that is why nobody will have an excuse not to believe in Him.

Some were opposed to the Preacher  who brought it to our attention, yes I also do not agree with all this man propagates such as the Big Bang which has been proven  to be invalid but Laminin is very much part of us.  We think Laminin is amazing but than God is God of the incredible and the impossible. 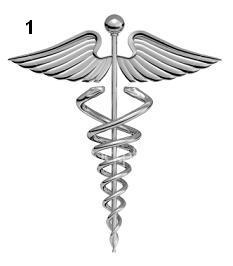 Although the first Symbol is often associated with the Greek god Asclepius his pole only had one snake and no wings as shown with Symbol two. The first symbol is often used as a symbol for Medicine especially in North America and is the symbol of the American Medical Association (AMA) and many other Medical Societies.

In Scripture one of the poles that it mentions is the one that Moses held high with a bronze Serpent attached to it and it was used to heal the Israelites. This pole is symbolic of Jesus Christ being hung on the Cross taking on Himself the punishment of the curse, the Snake representing the evil that was inflicted on Him and of which He triumphed over bringing healing and forgiveness to all of God’s Redeemed Children.

Numbers 21:8-9 And the LORD said unto Moses; Make thee a fiery Serpent, and set it upon a pole and it shall come to pass that every one that is bitten when he looketh upon it shall live. And Moses made a Serpent of brass and put it upon a pole and it came to pass, that if a Serpent had bitten any Man, when he beheld the Serpent of brass he lived.(KJV)

John 3:14-15 “And as Moses lifted up the Serpent in the wilderness even so must The Son of Man be lifted up. The whosever believeth in Him should not perish but have Everlasting Life.(KJV)

The Sword is also mentioned in Scripture Hebrews 4:12-14 in reference to Jesus Christ as the Word of God being sharper then than any double-edged sword,  (there is error in some Translations who have added the small particle “it ” these were not in the original Greek ) this Scripture is in reference to Jesus who is The Living Word John 1:1 not the Scriptures themselves.The Sword of His mouth is His Truth. Revelation 1:7 & 2:16 Why is this important because without Jesus who is our only Teacher and His wisdom and empowering, through The Holy Spirit, both of which we ask for and believe we receive, we cannot understand the Scriptures.1Corinthians 2:9-16

There is much debate today on what type of instrument Jesus was Crucified on but a cross is made from a tree and what we need to remember is that Jesus Himself referred to the Cross as significant, it is also the Symbol that Christians accept in their hearts as symbolic of greater Truths because as we can see in these Scriptures the Cross as Eternal significance and value.

1 Corinthians 1:18 For the preaching of the Cross is to them that perish foolishness but unto us which are Saved it is the Power of God.(KJV)

Some people say we should not look for a Sign and that is right if we are asking God to prove Himself but God still confirms as He always has His Power and Majesty through genuine Prophecies, Miracles, Signs and Wonders and these cannot be manufactured or duplicated fully by man or machine, in the past, now or in the future although there may be attempts.

John 20:29 Jesus saith unto him; Thomas because thou hast seen me thou hast believed, blessed are they that have not seen, and yet have believed.(KJV)

When Jesus said this to Thomas He was talking about us, we do not see Jesus in the flesh or with our own eyes but we still believe, it is not in reference to there being no Signs and Wonders today as some claim.

God’s Miracles are not based on a lie or are they incomplete and they have their fulfillment in God’s appointed time. We can see in these Scriptures below and there are many more that speak of the Truth of the Power of God being alive not dead as He is not dead.

Daniel 4:3 How great are His signs! and how mighty are His wonders! His Kingdom is an everlasting Kingdom, and His Dominion is from generation to generation.(KJV)

Daniel 6:27 He delivered and rescued and He worketh Signs and Wonders in Heaven and in earth who hath delivered Daniel from the power of the lions.

Mark 16:20 And they went forth and preached every where the Lord working with them and confirming the word with Signs following.

Hebrews 2: 4. God also bearing them witness both with Signs and Wonders, and with divers Miracles and gifts of the Holy Ghost according to His own Will?

Christian Love Always in our Unity in Christ Jesus – Anne.

My name is Anne although some call me Grannie Annie especially Children whom I share with in my Funday School . I live in Queensland Australia. I’m very much a People person believing we are all People of worth and unique, so I have much Joy in sharing with people personally and over the Internet. My main focus in life is my wonderful Friendship with Jesus Christ, without Him everything else would be meaningless, I have deep heartfelt thanks and appreciation that I'm a Spiritual Child of The King of Kings and I seek to share with others how truly wonderful that is with the hope they too will realize the same and be set free now.
View all posts by Freedomborn →
This entry was posted in Interesting and Unusual, KING OF KINGS AND LORD OF LORDS and tagged Amazing Love, Bible, Blessings, God, God's awesome Creation, God's Mercy, God's Miracles, God's Truth, Scriptures. Bookmark the permalink.