Anzac -The Man and his donkey

The Man and his donkey

John Simpson Kirkpatrick, affectionately known as “The Man and his donkey”, was born on the 6th of July 1892 in South Shields, England.

He landed at Anzac Cove at 5 a.m. on the 25th of April 1915 and was mortally wounded in Shrapnel Gully, near the mouth of Monash Valley, on the 19th of May 1915 at the age of 22. During the 24 days he spent at Anzac he operated as a sole unit with his beloved donkeys and is credited with saving the lives of probably hundreds of men.

By mid-morning on April 26th stretchers had become a scarce and precious commodity at Anzac. Used to carry the wounded and taken out with them to the ships they mostly weren’t being returned, forcing the bearers to improvise.

The wounded were being carried over men’s shoulders. For those seriously wounded in the chest or abdomen etc this of course wasn’t possible. Then groundsheets had to be used.

During the morning hours of April 26th Jack did what many of his mates were doing – carried casualties back to the beach over his shoulder – until he was stopped dead in his tracks by something he saw; something he’d been passing for hours, but in common with the rest of his mates had paid little attention to.

A number of donkeys had been landed, along with their Greek drivers, to carry kerosene tins of water for the troops. Some of these donkeys had been abandoned by their drivers and now sought shelter and what little grazing there was in amongst the wild overgrown gullies. Jack was responding to a call of – “Stretcher-Bearer!” – when he saw, grazing unconcernedly near the wounded man, a donkey.

As he approached closer no doubt there suddenly appeared in Jack’s mind another picture – one all too familiar, and from his not-too-distant past. Sitting on the back of that funny little long-eared creature he would have seen – a child, laughing and care-free as he was being led along the sands, with Jack walking along next to the donkey, looking back at him over his shoulder every now and again. But if a child Jack must have thought – then why not a man! Of course! It was the perfect answer.

Jack had none of the essential equipment he needed – but he did have a pocketful of field dressings. They’d have to do for the time being. He knew that once he got his hands on the necessary materials he’d be able to fashion something much more substantial and appropriate.

A portion of one bandage served as a primitive “head-stall”. Then a first field dressing provided him with a “lead rope”. There was no way in the world his passenger was going to be able to stay on the donkey’s back by his own efforts – with no saddle, stirrups, reins or anything else to hang on to. He’d just have to hang on to Jack, as this donkey-man carefully guided his little beast of burden along. Jack lifted his passenger aboard, then, sufficiently equipped for the moment, set off for the beach, on his first donkey-ride, and on his new career.

During these first days Jack had to rescue his casualties off the battle-field, sometimes in clear sight of the enemy. In 1915 E.C. Buley collected a number of eye-witness accounts from wounded Anzacs in hospital, of Jack at work. In Buley’s words:

When the enfilading fire down the valley was at its worst and orders were posted that the ambulancemen must not go out, the Man and the donkey continued on placidly at their work. At times they held trenches of hundreds of men spellbound, just to see them at their work. Their quarry lay motionless in an open patch, in easy reach of a dozen Turkish rifles.
Patiently the little donkey waited under cover, while the man crawled through the thick scrub until he got within striking distance. Then a lightning dash, and he had the wounded man on his back and was making for cover again. In those fierce seconds he always seemed to bear a charmed life. Once under cover he tended his charge with quick, skilful movements.

Jack and his mates carried their casualties down the “Long Valley”, of Monash Valley and Shrapnel Gully (as it was known then) to the clearing hospital on the beach. The distance was about twelve hundred metres. Using his donkey and working all day and halfway into the night Jack could make between twelve and fifteen trips a day. The two-way trips took about an hour, and this still left Jack time for a mug of tea and a chat with his mates at the cove after dropping off his casualty at the clearing station.

The Advanced Dressing Station of the 4th Field Ambulance at the head of Monash Valley, below Pope’s Hill . It was from here Jack collected most of his casualties after the first week.

The other two-man stretcher teams were hard pressed to make six trips a day down the valley. Cpl. E.H. Kitson, a stretcher-bearer with the 4th Field Ambulance, made the same trip as Jack daily, and he has left a detailed description:

Jack used a number of donkeys, which he called by a variety of names: Murphy, Abdul – even Queen Elizabeth. But his favourite name was Duffy. Andy described how Jack’s career had begun on that second day: “The original order was amended to two men [to a stretcher] as the bearer numbers were badly depleted. The hard fighting throughout the day caused heavy casualties, until the bearers had inadequate means to do their work.

The shortage of stretchers was relieved in a measure by improvised equipment sent ashore by the warships. But the need was still so great that it inspired [Simpson] to commandeer a stray donkey, which he named Duffy.”

Capt. Victor Conrick added: “At the landing, April 25th 1915, he went ashore with his bearer squad of four; his three mates were either killed or wounded and Simpson was left alone.” 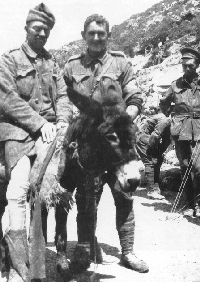 Jack only carried men wounded in the leg (and some head wounds); that is, men who could sit astride a donkey with assistance. He left the serious chest and abdomen wounds, those who had to be stretchered down to the beach, to the scant resources of the two-man bearer squads available. Colonel Monash fully recognised the value of Jack’s self-imposed role, stating that “Simpson was worth a hundred men to me.”

From April 26th Jack “ran his own casualty carrying service” (in the words of Andy Davidson), refusing to go back to his own unit at the end of each day’s work along with his mates. He knew what he had to do, and nobody was going to stop him. Jack knew that he could rescue many more casualties using a donkey, than as part of a stretcher team. He had a natural way with animals, especially donkeys.

My name is Anne although some call me Grannie Annie especially Children whom I share with in my Funday School . I live in Queensland Australia. I’m very much a People person believing we are all People of worth and unique, so I have much Joy in sharing with people personally and over the Internet. My main focus in life is my wonderful Friendship with Jesus Christ, without Him everything else would be meaningless, I have deep heartfelt thanks and appreciation that I'm a Spiritual Child of The King of Kings and I seek to share with others how truly wonderful that is with the hope they too will realize the same and be set free now.
View all posts by Freedomborn →
This entry was posted in In Memory, Interesting and Unusual, Messages From The Heart, Special Days and tagged A Man with a big Heart, Anzac Day, Courage, Kindness and Compassion, Remembering Anzacs, The Man and the Donkey. Bookmark the permalink.

28 Responses to Anzac -The Man and his donkey