The Scriptures confirm Jesus was Crucified on Good Friday….. 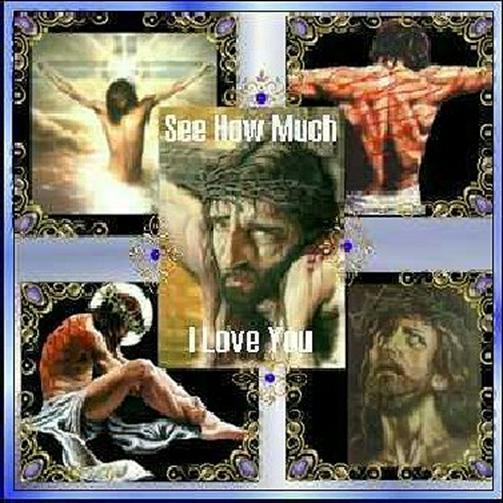 Easter is almost here, it brought the promise of Eternal Love, Hope, Joy , Peace, Unity and Rest for all of us in Christ Jesus, the Greatest Gift ever given to Mankind. Do you think God knew and recorded in Scripture when Jesus would be Born of a woman and conceived by The Holy Ghost and later be Crucified so we could be Redeemed and set free from sin and death. Do we know the date we were Born and will the date we die be recorded too.

God allotted or ordained the time we would live on earth, He knew when we would be born and when we will die, He can extend our lives but does not cut them short needlessly, His plans for us are very good. What we do with the time we have on earth is our choice, He will not force us to seek after Him or Love and obey Him but He knows if we will, He knows if we are His and so He draws us to Him and shows to us His great Love in words and deeds.

Some say since the time of Jesus’ Birth and Death are not recorded in the Scriptures, it doesn’t matter when it was, some make up their own time and reject when we celebrate His Birth and remember His crucifixion, God tells us about both these events and when they happened very clearly in Scripture, if we have eyes to see.

The first day of the week was Sunday the day after the Sabbath and it was than that Jesus appeared to Mary and warned her not to touch Him because He was not fully resurrected.

Later Jesus talked  to Cleopas and another one of His followers on the road to Emmaus, it was Friday three days earlier that Jesus was Crucified as stated by them (see below) so He could not have been Crucified on the Wednesday or Thursday as some claim or any other time, we remember also His death followed a sequence of events that is recorded in the Scriptures and Secular History.

Luke 24: 18 -21 And He said unto them, What things? And they said unto Him, Concerning Jesus of Nazareth, which was a Prophet mighty in deed and word before God and all the people: And how the Chief priests and our rulers delivered Him to be condemned to death, and have crucified Him. But we trusted that it had been He which should have redeemed Israel: and beside all this, to day is the third day since these things were done.

When Jesus talked about being 3 days and three nights in the earth is was in reference to the resurrection of His body which we know was not fully resurrected untill after Sunday night , we see this clearly by His statement to Mary not to touch Him on the Sunday Morning, this was because His body was still not yet fully resurrected, and this did not happen before Jesus appeared to the Disciples .

It was on Sunday night that He expounded the Scriptures with those He meet on the road to Emmaus, and later when His Body and Spirit were fully resurrected, He appeared to the Disciples and was able to eat and to be touched by them.

This means Jesus’ body was in the earth 3 days and three nights as Jesus foretold in the sign of Jonah. His Spirit was in Paradise with The Father on the Friday after He died on the cross but His body was not yet resurrected.

He said to the thief on the cross who asked to be remembered, that He would be with Him in Paradise that day and Paradise is not part of Hell as some claim it is Heaven, we know this because there is a chasm between Heaven and Hell that no one can cross and Jesus did not say we will be in hell together to the thief , yes Jesus set the prisoners free, but Jesus and the Thief’s spirits entered Paradise when they died on the Friday but He was not fully resurrected till the early hours of Monday Morning.

After Christs Death and resurrection all those who are in Him are resurrected fully, spirit and body when they die as the Scriptures tell us and we also see this in Revelation with the Martyrs before the Throne. Those who are God’s redeemed Children but died before Christ’s death will be fully resurrected when He returns, but their spirits are now with God, Jesus has set them free from sin and death.

Matthew 17:1-4 And after six days Jesus taketh Peter, James, and John his brother, and bringeth them up into an high mountain apart, And was transfigured before them: and His face did shine as the sun, and His raiment was white as the light. And, behold, there appeared unto them Moses and Elias talking with Him. Then answered Peter, and said unto Jesus, Lord, it is good for us to be here: if thou wilt, let us make here three tabernacles; one for Thee, and one for Moses, and one for Elias.

So does it matter if we all believe differently about God’s Truth, yes it does, it waters it down to unbelievers and it shows contentiousness when we argue about man’s understanding instead of agreeing with Gods inspired words in the Scriptures and also lack of Love and Unity in Christ Jesus when we don’t agree and Paul warned about division in God’s Church. There are now many Denominations and House Churches, so we can see that arguing or even agreeing to disagree only causes division.

Paul asked; who do you follow or believe, man or God. We are not to argue, but nor are we to continue to have differences, we are to be of one mind and if we have the mind of Christ we will be.

1 Corinthians 2:16 For who hath known the mind of the Lord, that he may instruct Him? but we have the mind of Christ.

Philippians 2:4-6 Look not every man on his own things, but every man also on the things of others. Let this mind be in you, which was also in Christ Jesus:

Corinthians 1: 10 -11 Now I beseech you, brethren, by the name of our Lord Jesus Christ, that ye all speak the same thing, and that there be no divisions among you; but that ye be perfectly joined together in the same mind and in the same judgment.

Philippians 4:2 I beseech Euodias, and beseech Syntyche, that they be of the same mind in the Lord.

.
But if we don’t agree on God’s Truth, we ask Him to show us by Scripture who is in error, we don’t just walk away and start our own Church, we might think we are right but we are very wrong when we do this but it does take two to agree to resolve differences.

Philippians 3:14-16 I press toward the mark for the prize of the high calling of God in Christ Jesus. Let us therefore, as many as be perfect, be thus minded: and if in any thing ye be otherwise minded, God shall reveal even this unto you. Nevertheless, where to we have already attained, let us walk by the same rule, let us mind the same thing.

God will hold those who don’t want to seek resolution, accountable for the division and also as Shepherds for leading His sheep astray by causing division and lack of Love for those who do not agree with their beliefs, man made Ordinances and Traditions. But we are to keep Gods, such as Believers Baptism for repentance and Communion. But if  there is repentance and they choose to seek restoration and Unity again through The Lord’s Leading, they will be forgiven.

This is not in reference to those Churches who promote the New Age or the Occult, or anything forbidden by God, we are not to be part of them or agree to the evil they propagate.

2Corinthians 13:11 Finally, brethren, farewell. Be perfect, be of good comfort, be of one mind, live in Peace; and the God of Love and Peace shall be with you.

Philippians 2:1-3 If there be therefore any consolation in Christ, if any comfort of Love, if any fellowship of the Spirit, if any bowels and mercies, Fulfill ye my joy, that ye be like minded, having the same Love, being of one accord, of one mind. Let nothing be done through strife or vainglory; but in lowliness of mind let each esteem other better than themselves.

Galatians 24 -26 And they that are Christ’s have crucified the flesh with the affections and lusts. if we live in the Spirit, let us also walk in the Spirit. Let us not be desirous of vain glory, provoking one another, envying one another.

1 Peter 3:7-9 Finally, be ye all of one mind, having compassion one of another, Love as brethren, be pitiful, be courteous.

Thank you for listening and if wanted as always, feel free to ask questions even if you disagree.

Christian Love in our Unity in Christ Jesus – Anne

My name is Anne although some call me Grannie Annie especially Children whom I share with in my Funday School . I live in Queensland Australia. I’m very much a People person believing we are all People of worth and unique, so I have much Joy in sharing with people personally and over the Internet. My main focus in life is my wonderful Friendship with Jesus Christ, without Him everything else would be meaningless, I have deep heartfelt thanks and appreciation that I'm a Spiritual Child of The King of Kings and I seek to share with others how truly wonderful that is with the hope they too will realize the same and be set free now.
View all posts by Freedomborn →
This entry was posted in A Good Focus, KING OF KINGS AND LORD OF LORDS, Messages From The Heart, Special Days, Words of Encouragment, Words of Warning and tagged Amazing Love, Bible, Body of Christ, Family, God's Faithfulness, God's Mercy, God's Truth, Good Friday, One in Christ Jesus, Rescued, Saved, Scriptures, Set Free from sin, Set free to be Holy, Unity in God's Church. Bookmark the permalink.

17 Responses to The Scriptures confirm Jesus was Crucified on Good Friday…..