Posted on January 4, 2013 by Freedomborn

.
There is a song that I learnt at Sunday School and I was reminded about it recently, I have shared it with many Children over the years, in my R.E Classes, Sunday Schools and Funday School, it’s called…  ” He’s got the whole wide world in His hands ” I’m sure many of you know it and it is very True but it does not include the evil that happens in the world and the pain and hardship we suffer, all good things come from God because He is Love and Love is Pure, it does not rejoice in evil and it never chooses to do evil, agree with it or willingly allow it but will tolerate evil to bring good from it but does not do evil to bring good out of it … a big difference .
.
What some may think is evil may be God’s Love, Compassion and Mercy reaching out in deliverance,  such as the World wide flood in Noah’s time and Pagans being put to death, as we read about in the Old Testament, this is so they would not cause more suffering.
.
1Corinthians 13:4  Love suffereth  long, and is kind; Love envieth not; Love vaunteth not itself, is not puffed up, Doth not behave itself unseemly, seeketh not her own, is not easily provoked, thinketh no evil;  Rejoiceth not in iniquity, but rejoiceth in the truth;   Beareth all things, believeth all things, hopes all things, endures all things. Rejoices not in iniquity, but rejoices in the Truth;  Love never fails.
.
I would like to share with you something wonderful that I became aware of in the last few days, those who have been following our Blog would know this is not unusual with me….I believe without doubt our God is a God of the impossible and all His ways are Loving and Just, He has not changed, He has always been this way.
.
The Blessing of the Pomegranates started with a message I shared on our new Christmas Blog, about the  Christmas Symbols much the same as I did on Freedomborn last year, it’s now called ” Share with God’s Children”  ( link below ) a lot of its symbols were in an e-mail I received a few years ago, some more were added last year and the same this year and of course God’s Children are all ages.
.
Symbols- https://freedomborn.wordpress.com/2011/12/07/share-with-the-children/ 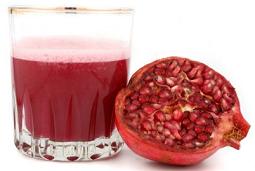 I had often seen Pomegranates in Christmas decorations but did not give them much thought until after I added the Pine cones to my message which Lady Dei had asked me about, after finding Pomegranates Christian symbolism on the Internet , which blessed me very much, I added them in too.
.
For the next few days I could not stop thinking about Pomegranates, this often means that God is talking to me when something good continues to be my focus, so when I saw an Organic bottle of Pomegranate juice in Coles, I felt He wanted me to drink it but I did not realize the Blessing this would bring.
.
I have had for many years a very bad skin reaction to the Toxins in my Body, these are caused by my health problems and some Medication that is needed for pain relief, so I have to take Antibiotics regularly especially if it is hot as my skin  blisters on parts of my Body and it is very painful and uncomfortable, I had been praying about this.
.
After buying the  Pomegranate juice I read up about their health benefits on the Internet ( link below) and was surprised to find that they also help Arthritis, I was so excited believing this was why God had encouraged me to drink their juice and I continued giving heartfelt thanks to Him and shared about them with my friends.
.
Web Link –  http://www.drfuhrman.com/library/article19.aspx
.
Then amazingly even though I was not able to get my Antibiotics because of a mistake with the Scripts,  I started to notice my skin condition was clearing up even though it was extremely hot, Wow I could not believe it  and you can be sure I have not stopped thanking God and have also shared about them even more.
.
My Doctor also affirmed  that they would indeed help counteract the Toxins in my Body, why she had not told me this before was perhaps because she feels Medicine does the same, which may explain why she still gave me another Script for the Antibiotics, just in case, anyway I almost danced out of her office, God is so very, very, good.
.
Some of you know that I have been Miraculously healed more than once in the past, all documented but unexplained. I was asked recently by a dear friend  why doesn’t God just heal all that I have wrong with me, I later asked Him why, His reply became a reality in my heart over the next few days…
.
God often heals us Miraculously when there is no other way, He knows what we can endure and He strengthens us so we endure and intervenes when we can’t but ageing and death is a part of life and sin can block His healing too,  but He is merciful and knows those who will seek Him.  He also gives us His abundant gifts in Creation to help us, the same as He provided for Adam and Eve in the Garden of Eden  and when we  seek Him, after asking Him with a Trusting believing heart, we are even more blessed and yes many can testify of His Miraculous Loving intervention in their lives, when all else had failed.
.
Pomegranates are indeed a wonderful blessing from God, so is Medicine if not abused and other natural gifts that He has given us, when all used in balance, His balance but He also tells us as we can see below a very important Truth which we all do well to remember…
.
I Timothy 4 ( 1-5 ) Now the Spirit speaketh expressly, that in the latter times some shall depart from the faith, giving heed to seducing spirits, and doctrines of devils; Speaking lies in hypocrisy; having their conscience seared with a hot iron;   Forbidding to Marry, and commanding to abstain from meats, which God hath created to be received with thanksgiving of them which believe and know the Truth.  For every creature of God is good, and nothing to be refused, if it be received with thanksgiving:   For it is sanctified by the word of God and prayer.
.
May we all continue to experience Gods abundant blessings in our Lives and give thanks to Him wholeheartedly.
.
Christian Love from  both of us – Anne
.
P.S Does anyone feel like a nice big Pomegranate…

Wow God is so very, very Awesome, so Good, Praise Him from who all Blessings Flow.

My name is Anne although some call me Grannie Annie especially Children whom I share with in my Funday School . I live in Queensland Australia. I’m very much a People person believing we are all People of worth and unique, so I have much Joy in sharing with people personally and over the Internet. My main focus in life is my wonderful Friendship with Jesus Christ, without Him everything else would be meaningless, I have deep heartfelt thanks and appreciation that I'm a Spiritual Child of The King of Kings and I seek to share with others how truly wonderful that is with the hope they too will realize the same and be set free now.
View all posts by Freedomborn →
This entry was posted in A Life That Is Blessed, Interesting and Unusual, Messages From The Heart, Words of Encouragment and tagged Amazing Love, Balance in all things, Don't fear Trust God, God Heals, God's awesome Creation, God's Balance, God's Love, God's Mercy, God's Miricles Happen, God's Truth, Gods Healing Gifts, Pomegranates blessing, Pomegranates Heal. Bookmark the permalink.

19 Responses to The Pomegranate Blessing