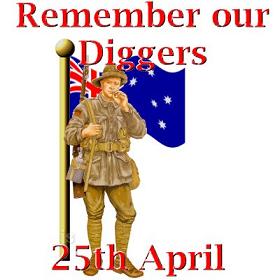 Australia takes time out  to remember those who have made the ultimate sacrifice for their Country and those who still serve.

Australia had  1.OOO.OOO of her population of approx 7-8 million ,in uniform and seeing 40-50 thousand of them not return . The giving of a life for the freedoms and lifestyles they cherished and wished to preserve.

I’m in debt to them, one I can never repay, my freedom is ensured by their sacrifice.

As a christian so too am I in debt for a sacrifice that I can never repay to my dear Lord and Saviour  Jesus Christ. It`s good for us to remember freedoms dearly bought.

We may not agree with War but without it people will die through injustice and without Mercy, yet we remember to pray for our enemies too, those who are on the front lines are not those who made the decision to fight instead of to Love . Matthew 5:43- 48

I will never look at a deck of cards the same again.

Will you ?
Deck of Cards

Here is a new way to look at a deck of cards!!

It was quiet that day, the guns and the mortars, and land mines for some reason hadn’t been heard.

The young soldier knew it was Sunday, a day in the week to worship in Unity.
As he was sitting there, he got out an old deck of cards and laid them out across his bunk.
Just then an army sergeant came in and said, ‘Why aren’t you with the rest of the platoon?’
The soldier replied, ‘I thought I would stay behind and spend some time with the Lord.
The sergeant said, ‘Looks to me like you’re going to play cards.’

The soldier said, ‘No, sir. You see, since we are not allowed to have Bibles or other spiritual books in this country,
I’ve decided to talk to the Lord by studying this deck of cards.’
The sergeant asked in disbelief, ‘How will you do that?’
‘You see the Ace, Sergeant? It reminds me that there is only one God
The Two represents the two parts of the Bible, Old and New Testaments

The Three represents the Father, Son, and the Holy Ghost.

The Four stands for the Four Gospels: Matthew, Mark, Luke and John .
The Five is for the five virgins there were ten but only five of them were glorified.
The Six is for the six days it took God to create the Heavens and Earth.
The Seven is for the day God rested after making His Creation.
The Eight is for the family of Noah and his wife, their three sons and their wives — the eight people God spared from the flood that destroyed the Earth.
The Nine is for the lepers that Jesus cleansed of leprosy He cleansed ten, but nine never even  thanked Him,  they remind me to always give thanks.
The Ten represents the Ten Commandments that God handed down to Moses on tablets made of stone.
The Jack is a reminder of Satan, one of God’s first angels, but he got kicked out of heaven for his sly and wicked ways and is now the joker of eternal hell.
The Queen stands for the Virgin Mary, chosen to be Jesus’ earthly Mother.

The King stands for Jesus, for He is the King of all kings.
When I count the dots on all the cards, I come up with 365 total, one for every day of the year..

There are a total of 52 cards in a deck; each is a week – 52 weeks in a year.
The four suits represent the four seasons… Spring, Summer, Fall and Winter.

Each suit has thirteen cards – there are exactly thirteen weeks in a quarter.

So when I want to talk to God and thank Him, I just pull out this old deck of cards and they remind me of all that I have to be thankful for.’

The sergeant just stood there. After a minute, with tears in his eyes and pain in his heart, he said, ‘Soldier,
Can I borrow that deck of cards?’
Author  T Texas Tyler

We pray for our Servicemen and women all around the world.

Hold them and us in your Loving hands, protecting and restoring your Peace and Unity within us.
Bless them, us and our families.
We ask this in the Name of Jesus Christ, our Lord and Saviour.
Amen
Of all the gifts we can give our Soliders, Prayer and showing them Love is the very best ones. 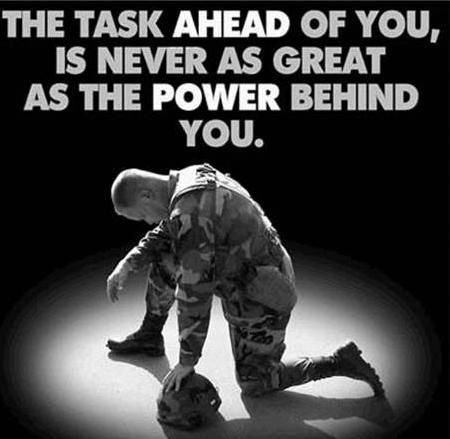 My name is Anne although some call me Grannie Annie especially Children whom I share with in my Funday School . I live in Queensland Australia. I’m very much a People person believing we are all People of worth and unique, so I have much Joy in sharing with people personally and over the Internet. My main focus in life is my wonderful Friendship with Jesus Christ, without Him everything else would be meaningless, I have deep heartfelt thanks and appreciation that I'm a Spiritual Child of The King of Kings and I seek to share with others how truly wonderful that is with the hope they too will realize the same and be set free now.
View all posts by Freedomborn →
This entry was posted in In Memory, Ron's Corner. Bookmark the permalink.